For  one year now, Hexapole Automatisering has been flourishing under one director, 36 year old Bas Bloemink. En this is actually quite remarkable, considering the fact that back in 1994 Hexapole started out as a partnership with six partners. Cees Brockhus was the last representative of the founding management team to step down at the end of 2017. Below, he looks back on the tempestuous story of the Beverwijk enterprise, which has something to celebrate in 2019. For Hexapole has been around for a quarter of a century, and the company laid a solid foundation for this event last year.

In 1993 six employees of Westvries Computer Consulting used an involuntary dismissal effectively by jointly establishing Hexapole Automatisering. A couple of years later, after a rapid development, the company had a second branch office in Luxembourg, which eventually became independent. Cees Brockhus was given a free reign to properly guide the development of the overall organisation. Ten years after its establishment, 35 people worked at Hexapole, with three partners in charge.

The development of specific software issues became Hexapole’s focal point. They have done projects for unique smaller employers such on projects such as the Great Word House dyslexia programme from Canada, but also for example for blast furnace constructor Danieli Corus. Moreover, Hexapole has grown into a notable specialist in a number of logistical areas, such as sorting systems (for clothing, books, and parcels), counting machines in the agricultural sector, and container management systems. The employer base was broadened with interesting customers such as the Swiss supermarket chain Migros, one of the largest parcel carriers in the UK, and the HVC Groep in Alkmaar.

New opportunities in the cloud

Of course, the economic crisis did not pass Beverwijk by without causing damage. It forced Hexapole – with a smaller and more flexible organisation – to examine new market opportunities and diversify its range: developing equipment inhouse, striking up joint ventures with other parties, IT network management, and – of course – contriving modern cloud applications.
In the 2010s, Cees Brockhus was seconded part-time to Tata Steel, and en Bas Bloemink joined Hexapole as programmer. His ambition was noticed, and he became project leader and eventually for Brockhus turned out to be the ideal successor. A young dog with old-fashioned values, focused on long-term relationships with existing and new employers.

In 2019, the company has been on its way up for some time. Hexapole works for a new generation of customers, who like to outsource processes completely. Tailormade, for fixed fees and against good agreements. And by applying this combination, hexapole has grown into  a strong and reliable player. The ideal IT team member for any enterprise, actually.

There is no room for complacency at Hexapole in 2019; there is, however, room to celebrate. For when one has been able to take one’s service to yet another level as an IT company even after twenty-five years in the business, one is allowed to give oneself a huge pat on the back. 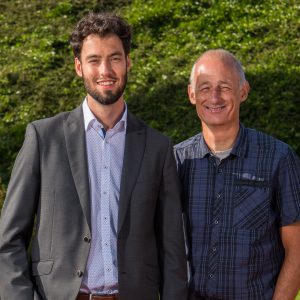