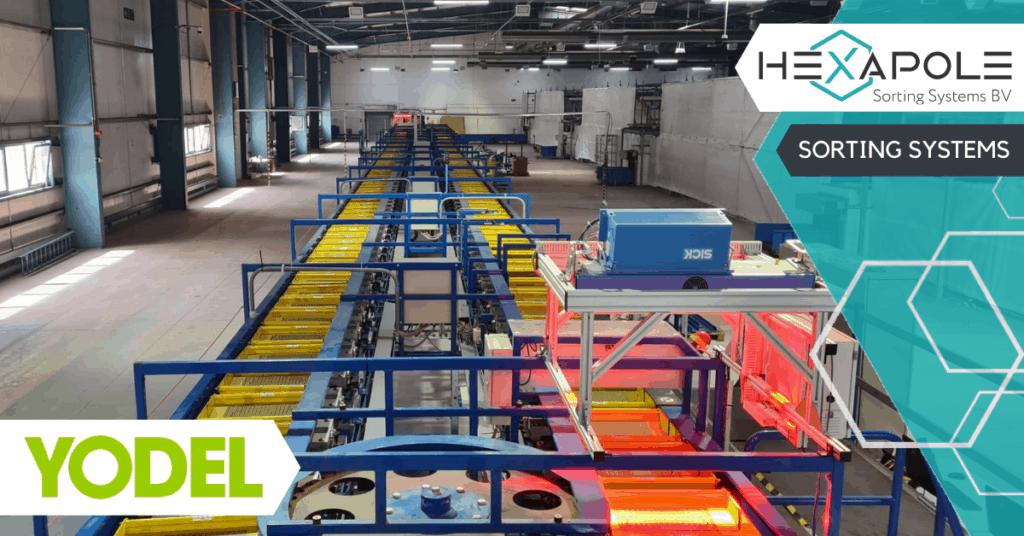 Yodel has partnered with Hexapole, a specialist sortation company based in the Netherlands, to optimise sorting capability for small parcels at their Shaw sortation centre in Oldham. The acquisition of an innovative sorting system will help Yodel to continue to meet the increased demand following the rise of online retail.

Collaboration between Yodel and Hexapole expanded

Hexapole have previously worked with Yodel and supplied the business with the first Small Parcel Sorter (SPS) on site at the Hatfield sort centre. As the number of parcels flowing through the system kept growing, Yodel decided to install a second SPS at their Shaw centre to help cope with the increased volume. This was delivered through a refurbishment and reinstallation effort using a unit originally installed in a third-party premise in Switzerland.

Very pleased that Yodel is working with Hexapole again

Carl Moore, Chief Operations Officer said: “We were thrilled to be working with Hexapole on a second SPS and once on site, the build process was remarkably quick, testament to their organisation and good planning. This investment in equipment and tech will help deliver improvements in flow as well as reduce parcel handling by our colleagues. Since its installation, the operational benefits have been immediate.”

Hexapole adapted and refined the sorter at their base in the Netherlands to meet Yodel’s specifications and was then transported and installed in Shaw.

Bas Bloemink, Managing Director at Hexapole commented: “At the Hatfield Distribution Centre, our sorting machine and software control have been used for more than 20 years. It is fantastic that Yodel has chosen to work with Hexapole to install a second SPS for their national distribution centre in Shaw. Our sorting system enables the company to manage all kinds of mixed flows of small and larger parcels.”

The new operation in Shaw sorts parcels into plastic sacks and when full, they are sealed, labelled and transported manually and directly to the dispatch door. This has eliminated placing any additional requirements for sortation capacity on the main sorter. Sacks can hold four times the quantity of parcels compared to the tote. Containerised parcels can be processed and tracked as a single unit. This substantially increases efficiencies and reduces the requirement for manual processes such as individual scanning.

Sustainability has been shown to be an added benefit as the sacks used in operations are fully recyclable and remain within the Yodel network. All empty sacks can be collected at the Service Centres and returned to the sorts for onward recycling.